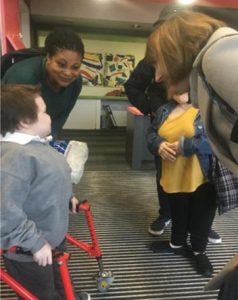 We are pleased to welcome Harriet Harman to Tuke School on 2nd April 2019. Harriet is the longest continually serving female member of parliament. She became MP for Peckham (now Camberwell & Peckham) in 1982 and has continued in this role to the present day.

She was keen to speak with parents/carers as students came into school. Many of you came along to have 1:1 conversations with her. Heidi took the opportunity to show her around, which is the first time she had seen the new building.

She was interested in the difference this building has made to us. She wanted to know about budget cuts, which had affected the school. She apreciated that the school staff all worked incredibly hard. Sadly, she had to dash off as she was called back to parliament.